skip to main | skip to sidebar

In August 2008, I took up the activity kite-surfing....a bit like wakeboarding behind a boat, but powered with a big kite that you harness yourself into. A bit unnerving at first, but exciting once you get going. I can actually do jumps now.....just not intentionally. If I over-steer the kite, I get yanked out of the water, smack face first into the water.

I kite-surf when I can on the weekends in Poole Harbor....a shallow body of water with good conditions for wind in the North/East/South directions, but very crowded on an ideal weekend day due to all the beginners also being there.

I'm still not great, but doing better. For more details, www.britishkitesurfingassociations.co.uk
Posted by Terry C at 12:01 AM 1 comment:

So far, I've really enjoyed my Sunday mornings here. I'm a rather early riser....and when I've ventured out on my bicycle or been kayaking, it's usually deserted most places (except for the occasional drunk on the sidewalk from the night/morning before). I think that's the time I enjoy the most.......having certain places all to yourself. In Chicago, there are always people around, so even if you are in the park or down a side street, within 5 minutes, someone is likely to come along and spoil your privacy. Today I kayaked for about 1.5 hours but only encountered about 2 people as I went along.....it doesn't start getting busy until noon, and even then, people don't start taking their boats out until 2 or 3pm, which is when the day is mostly over.

I've only ventured up the Stour/Avon rivers to this point.....I haven't had the courage to venture down into the main part of the Christchurch harbor as I've been told sometimes the wind can get the waves built up. As I'm still getting acclimated to the kayak, I need a little more time and confidence.
Posted by Terry C at 10:27 PM 2 comments:

Bournemouth went from a small quaint town to a bustling crazy place in just 1 day. Quite a number of out-of-towners here on the holiday weekend, driving in from London and elsewhere. As I walk along the beach, I recognize many a foreign tongues speaking.....Italian, Spanish, Indian, etc. Not sure if they are just venturing down from London or all the way in from other countries.....never thought Bournemouth would be such a melting pot.

So far, when I've been in many of the restaurants or fast food joints (a.k.a. fish and chip shops), there's been practically nobody in the place, so I wonder how they can stay open. But today I understood these are the days for which they froth at the mouth. There were queues after queues of people....and in sit-down restaurants, no availability for seating.....all booked up.
Posted by Terry C at 10:22 PM No comments:

Was busy working through the afternoon on Friday before holiday.....look up and thought I was in the twilight zone. 1/2 the floor had vacated early on the Friday before the holiday well before 2pm. No wonder no work ever gets done around here. Well, if I wasn't covering the holiday on Monday, I'm sure I'd be out the door somewhat early....but 2pm? They do enjoy their 3-day holidays here.....but as it's only 3 days, it's not as if they are traveling anywhere far.

When I've remarked where I've gone over a 1 day, 2 day or 3 day period, they are aghast that I can cover that much distance in a short time. They just don't understand how I can't just take a leisurely weekend day and do nothing.
Posted by Terry C at 10:17 PM No comments:

I had to meet some guy after work today to escort him to the back of the building to read a gas meter. There is access to the back area but he wouldn't dare go back there to do that without someone around. I just thought it odd. I was more unnerved that I had to leave work early just to do a meter reading.....and didn't know the guy from Adam. More surprised in this day and age why it wasn't captured electronically, but I digress.
Posted by Terry C at 10:14 PM No comments:

Occasionally for work I make it up to London to see some work colleagues and vendors. Originally when I used to fly into London for personal travel, it seemed so exotic, so untouchable. Perhaps it was the 8-hour flight that made it seem so far away, so remote, so different. But now that I can just pop up to London under 2 hours, it just seems like a commute, more like a true work trip.

The first work trip up to London, I got into Waterloo station and was dis-oriented. I've only been back 1 time since, but now know exactly where to catch the tube on to wherever I need to go. When I was there in May, it was quite warm and everyone (I mean EVERYONE) was laying out on the grass outside Buckingham Palace.

Riding on the tube is unnerving....it's worse than the Chicago CTA for reliability. No, there's no risk of the train teetering on the edge of a track when jumping a track, but there are constant delays and downtime. Ask anyone in London.....and they'll go off about this. But don't dare ask anyone while you're on the train....it is TABOO to talk to someone on public transportation. VERBOTEN! But aside from the train, you can either walk.....or take a cab and sit in traffic for hours. Not sure which is the least of all evils. :)
Posted by Terry C at 10:06 PM No comments:

In my work, I sometimes have to contact Sydney, Australia.....which is 10 hours time difference from Bournemouth. So, if I get into work by 6am, it's already 4pm in the afternoon. If it was most businesses there, many would already be rushing to the beach for a few hours on the waves. But as they are remote, many of them work late and are cognizant of keeping some overlap with the UK.

Conversely, when I'm ready to go home, people in the US are just starting to get in gear....and because we Americans are so self-geocentric....we just assume everyone's going to work our same hours. "How dare they be gone from work when it's only 2pm in the afternoon locally?" People do realize when you are gone from work......but it's nice to come into work the next day and have a flood of new emails in their in-box. Hee hee hee....although they catch on, and you get the reverse as well. :(
Posted by Terry C at 10:01 PM No comments:

And for any UK citizens, please don't be offended by anything I write. It's just my observations about what I see differently, and based on my preferences. It doesn't mean either way is right or better, just different. 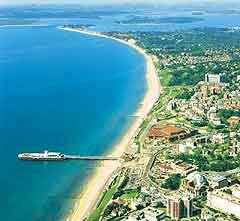 coastline with Poole Harbor in back